Iceland is a magical place to visit in winter. Witness the Northern Lights while soaking in hot springs, visit ice caves, enjoy frozen waterfalls, experience the polar night, and be fascinated by the exceptional beauty in Iceland in winter.

December is Iceland's darkest month, but Icelanders respond with a festive atmosphere, Christmas markets, concerts, and New Year celebrations. In January and February, the country is dark, cold, and strikingly beautiful under its snow cover. Thanks to the Gulf Stream, winter in Iceland is still mild. If you visit Iceland this time of year, you will be able to enjoy natural wonders covered in snow and magical light, making Iceland's landscape even more stunning. It is also a quieter time of the year with fewer tourists and more attractive prices.

Things to see and do in Iceland in winter
Daylight hours are shorter in winter and the weather is a bit chillier, but you can still enjoy the Icelandic nature around you. Join a snowmobile tour on a glacier, take a glacier walk, chase the northern lights, soak in the blue-milky waters at the Blue Lagoon, go ice caving, snorkel between tectonic plates in Silfra, visit the Golden Circle, or go horse riding. If you are lucky, you will catch the aurora while enjoying a hot bath in one of the natural geothermal pools in Iceland.

For those travelers who would like to undergo a self-drive adventure through a wintry Iceland, it is also possible, but we highly recommend renting a bigger 4x4 car. Taking a self-drive in Iceland in winter is the perfect way to experience the magic of the winter season and feel the power of wild nature. Why not spice it up further and get behind the wheel of a super jeep and explore the South Coast and the Golden Circle on your own.

But remember, the hunt for the northern lights is just one of the countless attractions in Iceland. The country is a heaven for adventurers and nature lovers alike! Combine the search for the magical lights with sightseeing to Iceland’s scenic landscapes and thrilling winter activities. While some more off-the-beaten-path attractions are closed or inaccessible during winter, you have many places to visit. Golden Circle, Snaefellsnes, Reykanes, and Jökulsárlón are all easily accessible during winter.

WHAT DO TO & SEE IN ICELAND IN WINTER

We’ve picked out our 6 favourite unforgettable winter experiences in Iceland.

DISCOVER THE ICE CAVES IN ICELAND

Exploring the Icelandic ice caves is only possible in wintertime when the glacial rivers have frozen. Undeniably, one of the biggest wonders of mother nature.

If you are looking for winter magic, go to Myvatn, the jewel of northern Iceland. Astonishing northern lights displays, natural wonders and plenty of outdoor winter activities await you.

Riding an Icelandic horse is an incredible activity anytime, but in wintertime, the snowy landscape adds another dimension to it.

SOAK IN A WARM HOT SPRING ON A WINTER DAY

Bathing in a hot spring while gazing at the northern lights is one of the most beautiful experiences you can do in Iceland in winter.

Reykjavik is often cited as one of the best places in the world to celebrate the New Year and attracts people from all over the world.

HUNT THE NORTHERN LIGHTS IN A PRIVATE SUPER JEEP TOUR

Go for a northern light hunt in a private group with an expert guide only for you. Invite friends and family to join!

Is winter the best time for you to visit Iceland?

With our infographic, you´ll get an overview of each winter month, the daylight hours, the maximum and minimum temperature, the most popular activities, sights and places to visit.

6 reasons why you should visit Iceland in the winter

The snow
The snow completely transforms the entire country and wraps the landscapes in a white silence with the only sound of the snow crunching under your feet.

The light
Winter has the most beautiful light for photography, as the sun is so low on the horizon, creating a soft and golden light.

It is less cold than you think
Dress in layers and wear appropriate footwear and you will be safe!

Fewer tourists
There are fewer tourists in Iceland during winter. You might be lucky to have more places for yourself!

Cheaper
Winter in Iceland falls within the low season, so you´ll get much better prices on accommodation and car rentals.

EXPERIENCE WINTER IN ICELAND WITH US 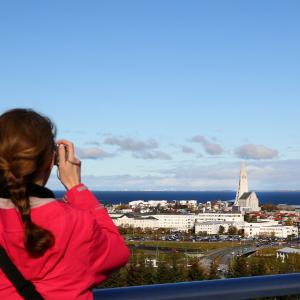 If you would like to plan your own dream holiday in Iceland, this is the option for you! We have a large selection of excursions available so that you can choose the activities you like at a time that suits you. Choose which hotel you would like to stay at, how many nights you want to stay, and which flights suit you, as well as your activities once there. Our flexible option lets you tailor make your own journey   Departures: All year, daily Direct flights from Belfast (BHD), Bristol (BRS), Edinburgh (EDI), London Gatwick (LGW), London Heathrow (LHR), London Luton (LTN), Glasgow (GLA) and Manchester (MAN). Connecting flights from other airports in the UK also available. 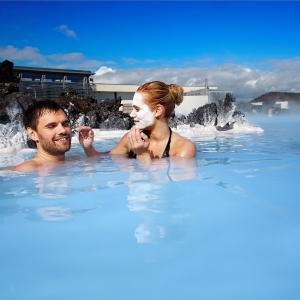 A varied trip that takes you to Iceland’s greatest and most classic sights and attractions. You spend the first night in cosy Reykjavík and on the second day you will get to experience some of the country’s incredible natural phenomena, such as the hot springs at Geysir and the mighty Gullfoss Waterfall. On the third day you will have some free time in the morning to explore before taking a revitalising dip in the warm and mineral-rich waters of the Blue Lagoon. Over the following days you can choose between some of our exciting excursions or simply relax in Reykjavík on your own. You can find more detailed information about the trip in the itinerary further down this page.   Departure 2020 - 2021: all year, daily. Direct flights from Belfast (BHD), Bristol (BRS), Edinburgh (EDI), London Gatwick (LGW), London Heathrow (LHR), London Luton (LTN), Glasgow (GLA) and Manchester (MAN). Connecting flights from other airports in the UK also available. 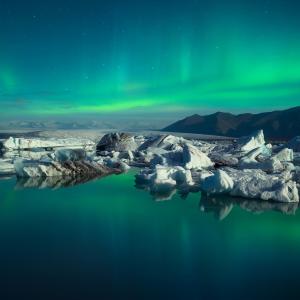 A holiday in winter wonderland Iceland where, in addition to visiting the most famous places of the country, we will also hunt for the magnificent Northern Lights. This is a real adventure of a tour, including such highlights as the famous Geysir hot spring area, the Glacier lagoon, beautiful waterfalls and much more. The tour is designed to maximise your chances of witnessing the amazing Northern Lights. We will stay in a hotel located in the countryside and the itinerary may be adjusted when an opportunity to witness the wonders of the Northern Lights arises.   Departures 2021: Departures from January to April; Thursdays. Direct flights from Edinburgh (EDI), London Gatwick (LGW), London Heathrow (LHR), Glasgow (GLA) and Manchester (MAN). Connecting flights from other airports in the UK also available.   #iceland northern lights tour package  #iceland northern light 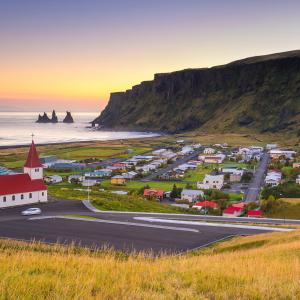 Discover Iceland’s south coast in your very own hire car. You will spend three nights at the same hotel in South West Iceland, heading out each day in your hire car to explore the rich variety of wonders that lie in wait nearby. You will then round off the trip with a night in Reykjavík. Throughout the entire trip you will be free to explore whatever appeals the most and you will have every opportunity to discover volcanoes, glaciers, black lava beaches, waterfalls and a world-famous geyser. Departures 2020 - 2021: All year, daily. Direct flights from Belfast (BHD), Bristol (BRS), Edinburgh (EDI), London Gatwick (LGW), London Heathrow (LHR), London Luton (LTN), Glasgow (GLA) and Manchester (MAN). Connecting flights from other airports in the UK also available. 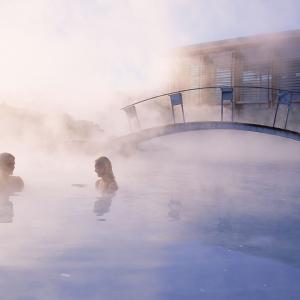 Experience Iceland with all your senses! The first evening pays homage to your sense of taste, when you are presented with a 2-course dinner at Sjavardgrilld, one of Reykjavik’s best restaurants. On day 2 you get to enjoy the Blue Lagoon’s naturally warm, turquoise waters, surrounded by rugged lava landscapes. You also have time to get to know Reykjavík and its many attractions and shops during this trip.   Departures 2021: All year, daily. Direct flights from Belfast (BHD), Bristol (BRS), Edinburgh (EDI), London Gatwick (LGW), London Heathrow (LHR), London Luton (LTN), Glasgow (GLA) and Manchester (MAN). Connecting flights from other airports in the UK also available. 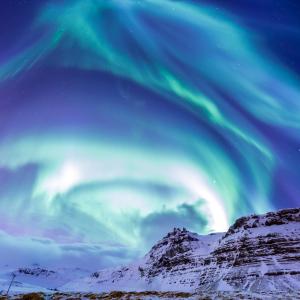 A holiday in winter wonderland where in addition to visiting Iceland's most famous places, you will also hunt for the magnificent Northern Lights and enjoy relaxation and wellness in a 4-star hotel. The tour is designed to maximize your chances of witnessing the Northern Lights as well as experiencing the warmth of Icelandic hot thermal water in the midst of the winter.   Departures 2020 - 2021: October to March: Sundays. Direct flights from Belfast (BHD), Bristol (BRS), Edinburgh (EDI), London Gatwick (LGW), London Heathrow (LHR), London Luton (LTN), Glasgow (GLA) and Manchester (MAN). Connecting flights from other airports in the UK also available.

THE WEATHER IN DECEMBER, JANUARY, AND FEBRUARY IN ICELAND

Despite its name and close proximity to the Arctic Circle, Iceland is not as cold in winter as most people would expect. A branch of the Gulf stream brushes its southern and western coasts bringing mild Atlantic air across the country. In the south and west, the warming influence of the Gulf stream keeps temperatures around 0°C during winter, but it can plummet to -20°C or more in North Iceland or the interior, especially when you factor in the wind chill. In general, there is quite a bit of snowfall in wintertime. Always be prepared for changeable weather and pay close attention to the weather forecast and road conditions.

Weather in Iceland in December
December is one of Iceland’s coldest and darkest periods when you can expect only 4-5 hours of daylight and temperatures between -2°C and 4°C. The 21st of December is the winter solstice in Iceland and the shortest day of the year, around four hours of daylight. In Reykjavik, the average rainfall is approximately 32 mm in December, which can be rain, snow depending on how cold it is. Despite the shorter and colder days, the winter days in January in Iceland can be quite pleasant if you dress properly. The crisp, clean winter air and the white snow create a cozy atmosphere.

Weather in Iceland in January
The average temperature in Iceland in January is only -1°C, and it rarely drops below -10°C which is milder than in other Scandinavian countries in January. Normally, it hovers between 0°C and 4°C. January can however have strong winds that will make the weather feel a lot colder. In January it also snows quite a lot, the average rainfall in Reykjavik is approximately 41 mm, which is the highest of the year. With the winter solstice behind, the days in January are getting longer for each day that passes, gaining a significant amount of daylight. For those travelers that want to travel in January but want the maximum of daylight, we recommend visiting Iceland later in the month.  On 1st of January, there are 4 hours and 23 minutes of daylight and on the 31st there are over 7 hours of daylight.

Get to know the other seasons in Iceland

Explore each season in more detail and decide when is the best time for you to go to Iceland. 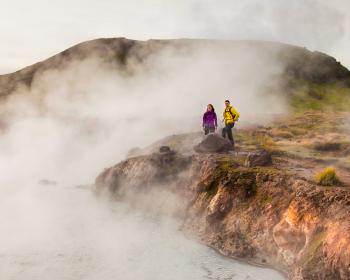 It does not matter if you travel to Iceland on your own or in a group with a guide, you will be amazed by the diversity of natural wonders that you 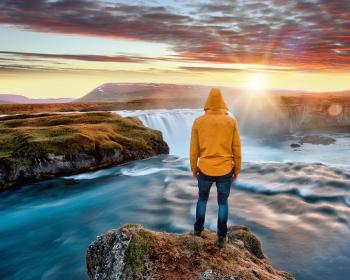 Hopefully, after reading, you can easily decide when to visit Iceland, depending on your interests, budget, and travel style. 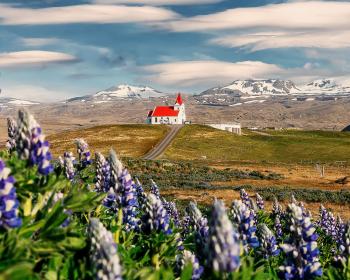 In April, the snow starts to melt away and make room for greenery and brighter colors. 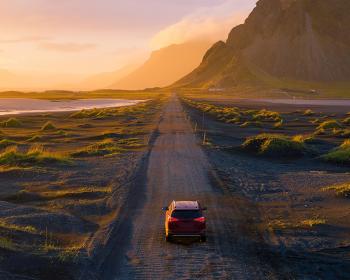 Summer is the perfect season for you who want to hike, camp, enjoy outdoor activities, and explore off-the-beaten places that are not accessible du